“What’s writing really about? It’s about trying to take fuller possession of the reality of your life”

You’re right Ted, writing these literary adventures is a great way to enjoy and live them again…despite the fact that, in this instance, it was raining, pretty heavily.

Luckily I had only to cross the road to get to the covered parking garage. The T was located on the second level. I got on the train, and then off at the station closest to Harvard where I hopped onto a connecting bus which promptly got snarled in traffic. After about twenty minutes onboard – with the bus crawling along geriatrically – I could stand it no longer. I jumped off and hailed a cab which sped quickly along several back streets only to get caught up itself several minutes later. Fuck it. I’d walk the last 10 minutes in the rain.

I arrived about ten minutes late figuring that James would be waiting. He wasn’t. Turns out he’d suggested the self same cafe I’d souped at the day before, Tatte’s, a block away from The Harvard Book Store. Another five minutes and he arrived, a tad wet, apologizing for being late after dropping his son off at school.

We talked a bit about our fathers, about the good old boisterous book blogging days, and about a biography of Margaret Thatcher, I think it was, that James was reviewing for The New Yorker. This was slightly off message for him, he said, a refreshing change though from his regular literary beat. James Wood teaches the practice of literary criticism at Harvard. ‘Great essays’ were on the books that day. I mentioned how fond I was of Huxley’s ( I have first editions of most; figure they represent his best work. Just as Updike’s represent his).

I’ll never forget the first time I heard from James. It was in the late noughties. I’d been blogging about books for a couple of years. Though a bit late to the game, I’d read his two essay collections and quickly became a fan. Whenever James reviewed a book I’d weigh in on my Nota Bene Books blog. His style, his points of argument, and his head-shakingly good metaphors were, I thought, as sweet as late harvested Gewurztraminer – better, they were, than what most of the authors he wrote about were capable of. His taste and mine were almost identical it seemed. Or perhaps it was just that I found the cases he’d built for and against the works he’d reviewed so damned unassailably convincing. Whatever it was, we were simpatico.

So each month when the parade of obtuse assholes and haters waddled out from their caves to denounce what he’d written, I’d go to battle with them defending James’s work as if I’d written it myself. I enjoyed the fight, despite the unpleasant ad hominem attacks. The passion and anger and vitriol that it produced – all over a piece of writing – was pretty enlivening. I got to hone my rhetorical skills and improve an existing talent for invective. I didn’t consider that James might be paying attention, figuring he wouldn’t waste his time with such nonsense – messing around in this online pig-sty.

Well, I was wrong. One evening, after returning home from dinner out, there it was. An email from him thanking me for the stellar service I’d been providing in the trenches. He’d noticed and appreciated it.

It really was a thrill. Also a bit surreal. Here was my literary deity proving that he existed – praising me for my work. Talk about making things seem more real. More worthwhile. My online scratchings had helped me to connect with a great writer. To better possess reality, as Ted Hughes has it.

It didn’t take long for me to ask James to participate in The Biblio File podcast. And while this hasn’t yet happened, it’s still on the agenda, mine at least. We’ve stayed in touch on and off – me mostly on, him mostly off – but no matter, it was great to meet him in person.

It had stopped raining. We walked together over to Stephanie Burt’s office where I’d left my copy of Don’t Read Poetry. There it was, unsigned, in the mail box beside her office door, just as she’d promised. James and I made our way over to the subway station and said our goodbyes. Yes. This was real.

Next stop was the Beacon Press to interview Helene Atwan its long-time director. The Press is affiliated with the Unitarian Universalists, serving in a way to lead their social justice mission. Established in 1854 and operating as a non-profit, the press has published books about slavery and racial inequality, women’s rights, the environment and intersectionality for decades, long before they became front burner imperatives. Important authors published by the press include James Baldwin

and Viktor Frankl, neither of whom have ever been out of print. Listen to my conversation with Helene here:

Getting to Helene’s office was fun. I knew I was fairly close – a 10-15 minute walk away perhaps – but I figured the quickest way to get there would be by taxi. Off we went. After a very short while I realized that the driver didn’t know where the hell he was going. He kept looking at his phone and asking me how to get there. Me. Then all of a sudden he rolls down his window, leans out and hollers at this female cop, who’s driving slowly by in the opposite lane, for directions. She points back around the corner. In no time we’re there. Just in time. No need to worry.

I asked Helene what she thought was the most beautiful or special book that the Beacon Press had published. Without hesitation she got up and removed Moments from the shelf

Its author Corita Kent was a religious sister, artist, and educator. Her artwork, mostly in silkscreen, conveys messages of love and peace, and made waves during the social unrest of the 1960s and 1970s. Only in recent years has she been credited for her role in the pop art movement.

After the interview I checked in at a soup and sandwich joint before heading over to Paul Wright’s place. Jonathan Rose, one of the founders of SHARP had suggested I talk with him because, over the years, Paul has been responsible for building one of the great ‘book history’ backlists. He was Editor at UMass Press from 1988 to 2006. Listen to our conversation here about the backlist and Paul’s own scholarly work in the field:

Next it was back on the T and over to Harvard again to meet another renowned book history scholar. Well, not just another, a giant in the field, Robert Darnton.

When Robert was in his mid-20’s he discovered an amazing archive in the town of Neuchâtel, Switzerland. It contains documents from The Société typographique de Neuchâtel (or STN) a local pirate publishing house active from 1769 to 1789. From it he was able mine a towering career’s worth of fascinating facts about the history of books and the pivotal role they played in determining the outcome of the French Revolution. 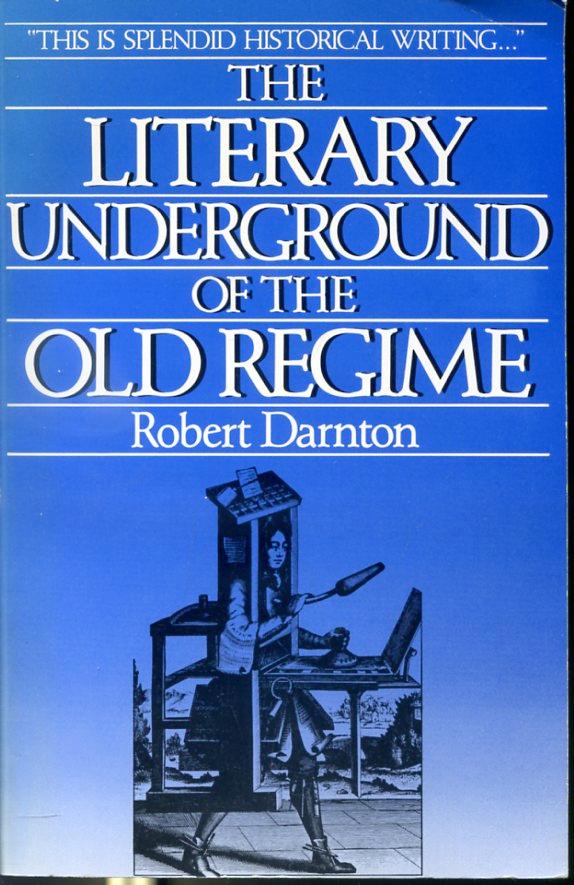 I entered the Widener Library, where Robert’s office is located, through the back door. He came down to meet me and we rode up several floors together in the elevator. He is tall and slim and looks no where near his age. I couldn’t help but attribute this to his ongoing enthusiasm for books (his youthful looks that is). He was wearing a navy blue sweater that reminded me of the ones my mother bought us when we were children living in the Channel Islands. Fisherman’s jerseys called Guernseys.

I’m normally whacked after conducting an interview – all that intense listening for opportunities to ask the right follow-up questions can be pretty tiring believe me. Plus concentrating, and trying not to sound too much like an asshole – it’s exhausting. This was the third interview of the day, on top of an undeniably emotional (even though I didn’t show it) encounter with Wood. It’s a wonder I didn’t pass out. Robert, however, was in very good form; answered all of my anodyne questions gracefully and at length. He even provided the perfect ending. Listen here for yourself:

I was knackered when I got back to the hotel (and we had a long drive ahead of us), so much so that when we were cleaning up the car for the trip back north, I chucked out the parking garage ticket along with the plastic bottles and assorted wrappers. Luckily, retracing my steps, I was able to retrieve it – dangling over the edge of the garbage dumpster to fish it out – not however without sustaining an unwarranted amount of grief from my travelling companion Dave. With key safely in the ignition, we hit the highway again, complete with a stash of good books, and a load of even better stories to tell.