I ‘d been browsing Francine Prose’s book Reading Like a Writer with some pleasure, and noticed, after conducting one of my regular panoramic literary event scans covering a circular territory – centre in Montreal, circumference a 3 1/2 hour drive away – that she was scheduled to speak in a few days time right out on the edge of the circle, at Skidmore College in Saratoga Springs, NY.

The Skidmore readings are connected to the New York State Writers Institute, at SUNY in nearby Albany. Together they draw some impressive talent, so I’m very attentive to what goes down there. In fact, today, Salman Rushdie happens to be on deck.

Time was limited. I put in a couple of calls, but predictably wasn’t able to tee up a Biblio File interview with Francine. Still, I was interested enough to jump in the car and drive down. I’d overnight near the college and drive to a bookstore in Cooperstown the next morning, July 4th. I’d dropped in on it years ago, but the visit was rushed, and I’ve harboured a desire to return ever since.

On the way down to Skidmore I listened to a podcast called Think Again. The guest was Martin Amis. There was some interesting talk about Joyce – 25% of Ulysses is brilliant, says Amis, the rest, not so much. He’s read about a third of David Foster Wallace’s Infinite Jest ( I flamed out at a quarter) and is respectful, suggesting that while DFW’s essays are good (agreed), especially the ones on tennis, his fiction tends to burns up the reader’s good will very quickly. Too quickly, unless of course you’re young and love the challenge of reading boring-as-a-pound-of-suet text. When the podcast host, Jason Gots, offers up that he’s “enraptured” by Wallace’s digressions, I have trouble suspending my disbelief. When Part ll of the podcast comes on and the discussion turns to AI, it was all I could do not to change the channel. I never turn Amis off, but this was over the top.

Another thing that bothered me was Jason’s sudden outbursts of maniacal, paradoxical laughter. Amis does his best to talk through it, I opted to listen to the country & western station.

I should perhaps come clean here. Prior to driving down to Albany I’d been organizing a trip to New York, lining up various stars to interview. I was keen to talk to Amis. Have been since I read London Fields. Who wouldn’t want to meet the man responsible for siring Nicola Six. So I fired off an email to his agent Andrew Wylie. “No,” was his firm response.  Not a hard, final no, just no this time round. The prospects might brighten closer to the time his next big ‘baggy’ novel hits the shelves.

So this “no” was ringing in my ears, at the same time I sat jealously listening to the jarring hyena laughter and inane discussion of the possibility that AI machines might one day replace novelists.

After arriving at Skidmore I walked the campus a bit

found the classroom, and took a seat close to the stage. I wasn’t in the most sanguine mood. The talks weren’t terribly enlightening. Both participants made a point of repeatedly referring to “their students,” in much the same way a mid-level bureaucrat is wont to talk about his “staff.” Once the floor opened up for questions I asked Francine what differentiated her book from How to Read a Book, written by a ‘dead white male’ more than fifty years ago. Few seemed to have heard of Mortimer Adler. Basically he advocated close reading, which is pretty well what Francine does in her book, along with providing some engaging exegesis.

More women, was the obvious answer. That’s pretty well it. I should add that although my question was presented provocatively, the intent was to facilitate Francine making this point.

As the tents were folding, a robust, busty young tatooed student glided past me and said “I’m looking forward to the day when you’re a dead white male,” missing entirely the good-natured purpose behind my question.

A couple of items of note about nearby Albany: McGeary’s Irish pub in Clinton Square has an excellent happy hour during which good, large, stiff, cheap drinks are poured. Plus Herman Melville’s childhood home – the plain pink edifice – can be found right next door. 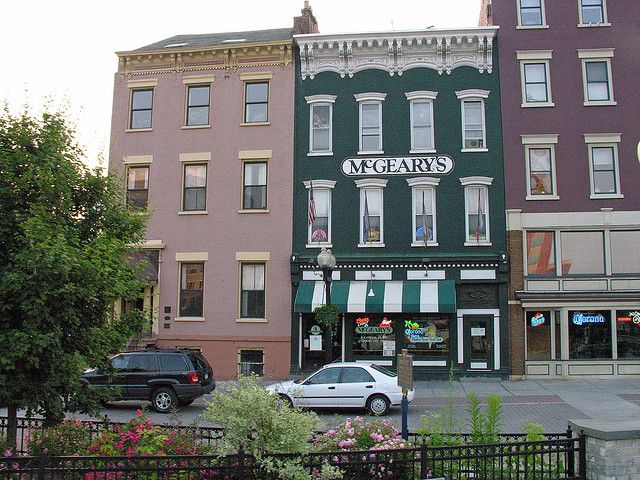 Speaking of buildings,  check these out:

They’re right downtown, part of a complex of state government offices called The Empire State Plaza. It was built between 1965 and 1976 at an estimated cost of $2 billion. There’s a major public collection of 1960s and 1970s monumental abstract artworks on permanent display throughout the site, plus there’s a performing arts center. The supervising architect was Wallace Harrison.

And final note: a year or two ago we were in town and I decided to check out the books section at a local thrift store. Damned if I didn’t find a 7th printing of the British Faber paperback edition of Anna Burns’s Booker-Award winning novel Milkman on the shelf! 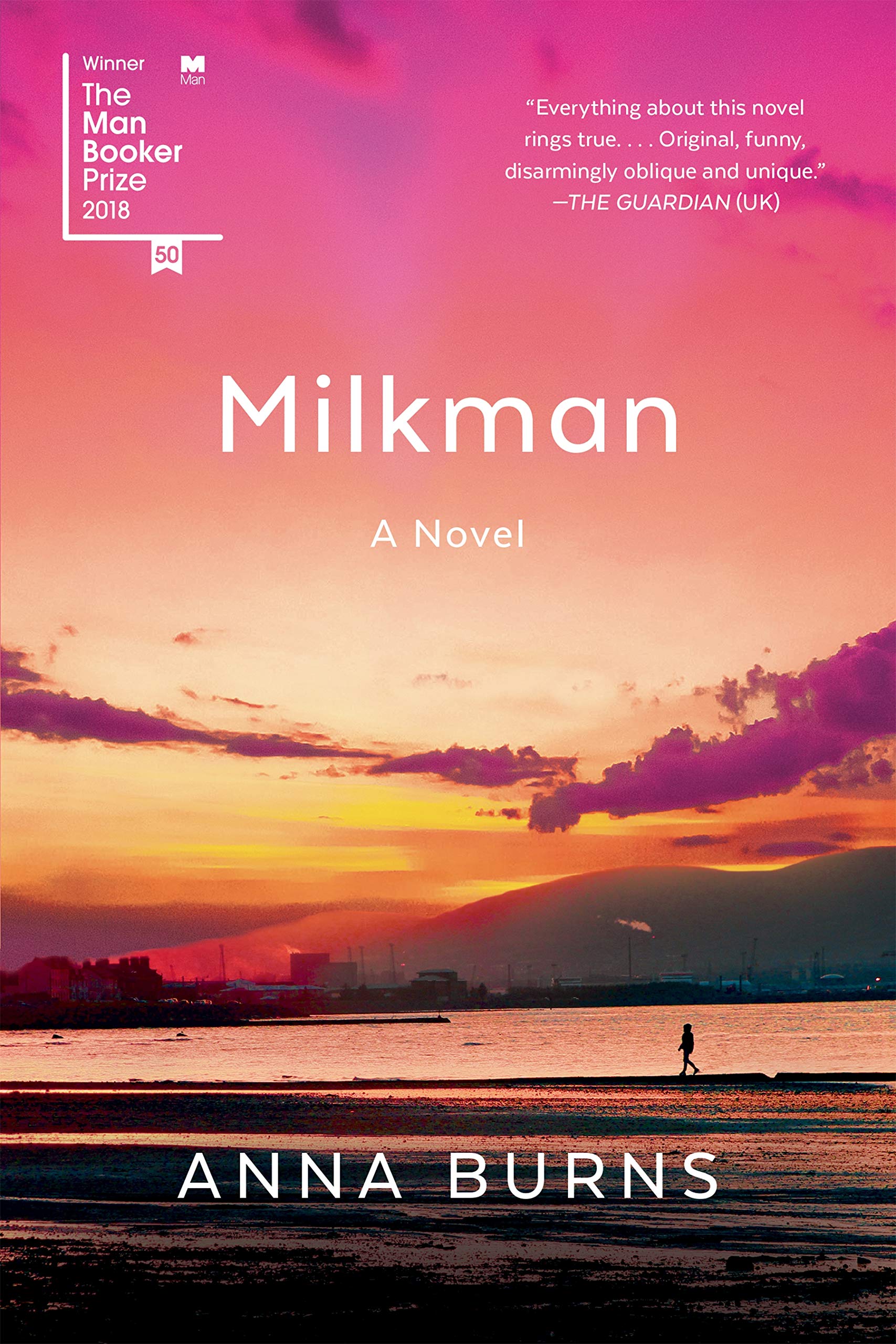 The reason for my overreaction was, first that it was the British edition (it’s published by Graywolf in the States – which means that someone had to have lugged the thing over the Atlantic) and second that not two months prior I’d talked about it during a Biblio File interview conducted in London with Faber CEO Stephen Page, listen here

Next morning I headed off to Cooperstown, NY, home to The Baseball Hall of Fame. It was a beautiful sunny day, which brightened the already colourful surroundings.

But I wasn’t here for the Hall, or for my name to be engraved for free on a baseball bat

or for the baseball gear. Not even the dogs, although I did dunk a couple for lunch.

No, I was here for the books, and Willis Monie Books had loads of them to offer at sparkling good prices. How good? Well check out the pile I bought ( mostly publishers’ histories). I think Willis was pleased.

This hog print also spoke loudly to me

as did a number of dust jackets from the forties and fifties on books all priced below $10, including a striking one by Milton Glaser, and this beauty published by the aforementioned Faber & Faber. Had to buy it.

After wobbling out of the store with my pile, I was greeted by this

actually, my first encounter with it was earlier in the morning after a breakfast I’d enjoyed at a diner across the street. At the time, I’d decided to squeeze out all the good I could from a bad situation by leaving the car parked where it was for the day. Still, I couldn’t believe that the town would stoop to ticketing me on the 4th of July. How damned unpatriotic.